Remembering a Mission: The hospital in Bamako

Since I have been away from home for the past week, I've decided to include tidbits from the 4 days we spent at the main hospital in Bamako in one post. This was my first clinical experience as a student in a medical profession and it was absolutely eye-opening in so many ways. Enjoy!

May 16 – Monday
We arrived at the main hospital, Point G, which was situated at the top of a mountain overlooking the city at 9:30 a.m. to meet with the hospital director to discuss how we would be involved. It was decided that we would split up into teams based on specialty and be prepared to round the next day with our respective departments. We received a tour of the hospital, which was set up like a university campus with individual buildings for each department. While most of the names of the departments were French cognates of the English versions (i.e. pulmonologie for pulmonology), one interesting difference was the term they used for their intensive care unit: the Reanimation unit. That evening we had our first debriefing session in which we discussed our first reactions to Mali. It was an intimidating experience since we were being videographed for a possible documentary of our trip. During this session everyone who spoke seemed to only feel comfortable sharing their surface opinions. We finally went "home" to the volunteer house where we spent a few hours organizing the medical supply bags. 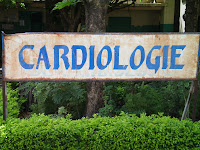 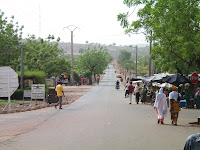 Once the preceptors left and we all showered, a classmate wanted to sneak out to the street to play with the children. At first the kids did not know what to make of us, but eventually they realized we were there to have fun with them and we spent quite a bit of time playing out in the street until late into the night. We weren't able to communicate verbally, but we were still able to have a great time. The kids were thrilled to have something new in their routine and we were able to see the true spirit of Mali in their eyes. They were happy and carefree.


May 17 – Tuesday
Today two classmates and myself were to rotate in the obstetrics & gynecology department. We started by observing the Malian version of morning meeting. The attending physician sat at the front and the residents and students posed cases to the group. The attending led the discussion and asked questions about each case. The major topics were eclampsia, pre-eclampsia and fibroids. Eclampsia is a rare complication of later pregnancy in the United States, but is devastatingly common in Mali. Pre-eclampsia precedes eclampsia and is usually characterized by high blood pressure during the later phase of pregnancy accompanied by a few other abnormalities; it becomes eclampsia when the blood abnormalities become to extreme and cause the mother to start having seizures. Fibroids is a common condition unrelated to pregnancy. These discussions were strikingly similar to the meetings we have had in class about clinical conditions.
After morning meeting, we followed on rounds from patient to patient. We saw patients with newborns, sepsis (bacteria in the blood), and pre-eclampsia in the same room laying in cots next to each other. There were no curtains, there was no privacy. Newborns were on the cots at their mother’s sides waiting for the go-ahead to go home. Family members sat in the hallways or on the foot of the beds offering support. It was a shocking environment.
Since this day was our first real day in a clinical setting as PA students, our preceptor brought us outside to do our own “debriefing” of the disease processes we saw. We discussed eclampsia, preeclampsia, and fibroids in detail: etiology, risk factors, pathology, clinical manifestations, treatment. Just like the old days in our clinical medicine class.

May 18 – Wednesday
MY FIRST SURGERY! Sort of...
Yesterday, our preceptor, who happened to be an Obstetrical surgeon, had apparently met up with on of the Malian surgeons and asked about scrubbing in… he was told if we got there at 8am we might have a shot. We played rock-paper-scissors for the order in which we would get to attend the surgeries; I won!  So this morning we were going to attempt to jump in on a C-section. Unfortunately we got there a bit late - as we rushed into the OR, the baby was coming out wrapped in garments in a metal basin. I really didn’t comprehend at that moment how strange it was to carry a baby out of a C-section in a metal basin, but looking back on it now, such a thing would never happen in the United States.
Where the baby was taken, I’ll never know, but we got caps and masks and peeked our heads into the back of the OR. I had never seen anything like it anywhere in my life. I had nothing to compare the experience to at home. This truly was the first surgery I had ever seen. Men were dressed in green from head to toe standing around a huge pink balloon they were tying knots in that was draped on all sides with green cloth. It was the new mother's uterus. I tilted over to ask, “Is that how it always looks?” As I later found out, it was. I could barely take everything in because I was so stunned by this open belly with the uterus out of it. Then it happened, as I feared it would. I started getting hot and clammy. My throat felt weird, my breathing pattern changed. I tried fidgeting, tapping my feet, swaying. My swaying kept me going though without really being able to pay too much attention. I was so determined not to pass out that I made it out of the surgery and through the walk up to the conference room before my body had enough and became nauseated and cold. I quickly went and sat on the steps, head between my knees and closed my eyes. I didn’t really need to close them; I already lost my vision as I used my hands to guide my body into a sitting position with my balance was barely intact. This was not the first time this happened to me, and would not be the last. I think all the excitement and nervousness of not wanting to touch anything caused me to stand to straight, allowed all the blood to pool in my legs... why I have these episodes remains a mystery.
That afternoon my classmate was able to jump into a fibroidectomy - the removal of a fibroid, and finally the next morning my other classmate got her turn in the OR. Each of us gained a life changing experience and life long memory.

May 19 - Thursday
Today we got to change our department to Internal Medicine for the morning. We attended rounds in which we were exposed to tuberculosis. Because there are no isolation rooms, or even curtains separating patients, everyone – patient or doctor – is exposed to each other’s illnesses. I found myself attempted to hold my breath as long as possible while inside the rooms and breathing quickly while walking out side between rooms. We also saw a patient with a rare form of pneumonia abbreviated PCP. It is an opportunistic disease that is found in patients whose immune systems are compromised – most notably in a patient with HIV/AIDS.
We then made the journey through the complex to the OB/Gyn building for afternoon clinic. We started off in the Gyn side (the two are separate rooms - each consisting of a desk, an half-wall partition, and an exam table). We encountered women who needed well visits, as well as women who had unusual complaints by American standards. The main concern was fertility. One women had only 3 children and wanted to catch up to her husband's first wife who already had 7 children. Another women wanted to ensure she could get pregnant as fast as possible once her husband returned from working in France next month. My classmates and I each took a turn in the OB clinic as well. This was run by midwives instead of doctors. We performed well exams on the women check the eyes for jaundice, the thyroid for enlargement, the breasts for milk production, and the belly for uterine growth. We measure the women's bellies with a measuring tape and attempted to listen for a fetal heartbeat with an old fashion metal fetoscope. As I said ... this was my first clinical experience as a PA student, and having had no prior OB/Gyn experiences I had no idea what I would find upon my rotation here at home. Needless to say, this is not the way we do things here, though it is quite resourceful in Mali considering their lack of access to supplies.
Posted by Jessie at 10:28 PM

Email ThisBlogThis!Share to TwitterShare to FacebookShare to Pinterest
Labels: Mali