To Villanova we go... 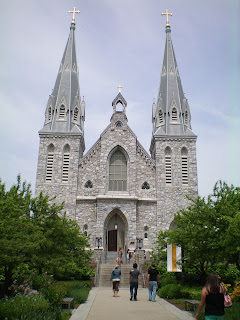 I LOVE my alma mater. The very first time I visited back when I was a lowly junior in high school I actually was sick and fought with my parents to stay home. Of course, I didn't have a fever and wasn't vomiting, so in my mother's book I was not sick. First stop was a teeny tiny school up near Scranton, PA. It was cloudy and drizzly and my mother's pick. Naturally, I had no interest in it. Then we drove the 2 hours down to Philly. Fortunately the sun was shining and it was April so the flowers were in bloom. We got to campus and my world changed. It was vibrant, people were everywhere, and they were having fun. My dad and I were solicited at the Oreo (space in the middle of campus where people gather) to participate in various on-goings being hosted by different groups on campus.

On our tour, we got the traditional Villanova speeches and dramatizations. The most memorable for me: "Pick your date before you pick you mate" There was a ubiquitously known rumor that the waiting list to get married at St. Thomas of Villanova was 4 years. Yes, FOUR YEARS. So the tease was to put your name down because, also a ubiquitously believed rumor, Villanovans often marry other Villanovans.

I was in love! All I could talk about was Villanova. And that church - it was the most beautiful parish church I had seen. White stone, pink marble floor. I was convinced I would attend this school and I was convinced I would get married in that church. It was the first dream and goal I had as a person (as opposed to a child). Everything to that point in my life was step-wise and determined; Villanova I would choose. And I did. I applied early action, was accepted and cried in a way I had never cried. I was not sad, I was not hurt. I was so relieved this dream was coming true, and the tears came rolling. It was the first time I cried out of happiness.

I could go on and on about Villanova ad nauseum. Mostly because it is the place were I became me. It is also the place I will be getting married to another Villanovan next year (2013). So why am I writing about this now? Because we are off to Pre-Cana tomorrow at Villanova! I am so excited to be going back after not having visited in 2 years. I don't know what is in store for us as far as pre-cana goes, but I have already begun preparing for the nostalgia that is about to ensue and planning how I will hit up all of my favorite stomping grounds while I am there this weekend. Wish me luck - there's a lot to accomplish!
Posted by Jessie at 5:54 PM

Email ThisBlogThis!Share to TwitterShare to FacebookShare to Pinterest
Labels: Getting Married, Villanova