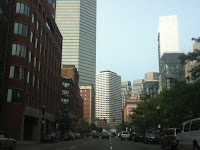 I've been to Boston a handful of times but yet I couldn't have told you one thing about this city until this past weekend. As a child I can tell you I went on a field trip to the science museum there, but I don't remember anything about the trip. As a college student, I drove into the city once to meet a friend for lunch at BU; the only thing I remember is the drive was a nightmare and I was lost 90% of the time. I also took an impromptu drive from Philadelphia to Boston during the NCAA basketball championship to cheer on the Villanova Wildcats in a crazy run to the Final Four. This trip was of course a there-and-back trip in which we drove 12 hours and were in Boston for about 3 hours.

This time would be different. This time I would be old enough to pay attention and have enough time to explore. The trip was planned around visiting friends. Our drive got us off on a bit of the wrong foot; driving from the NYC region to Boston is long and traffic-filled. It took us a bit over 4 hours and we hit mild traffic in every major city in Connecticut. We arrived late afternoon and had dinner scheduled on the waterfront.

If you're in Beantown, we'd recommend Joe's American Grill. They have more than one location: Newbury Street and Atlantic Avenue. The latter is located on the waterfront near the wharf. They have a beautiful, large outdoor patio and the weather was perfect for outdoor dining. Their cocktail menu is extensive for "girly drinks" and the dinner menu is quite varied. I had a fabulous tuna burger with wasabi aoili (sounds adventurous, but it wasn't spicy at all) and sweet potato fries. It was delicious and definitely hit the spot. 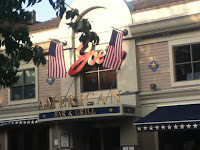 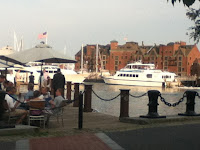 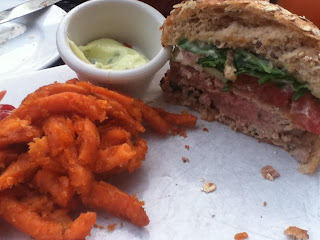 The next day we explored the famed Quincy Market, also referred to as Faneuil Hall. In the heart of downtown, this local has always been a market place and meeting hall for the city of Boston since the 1700s. Unfortunately we neglected to go inside of the Faneuil Hall, but Howie tells me there is a huge sweets shop in there. On the first floor of the Quincy Market building is the largest cafeteria I've ever seen. Outside surrounding the cafeteria building are additional restaurants, bars, and trinket shops with carts selling all sorts of souvenirs and goodies. 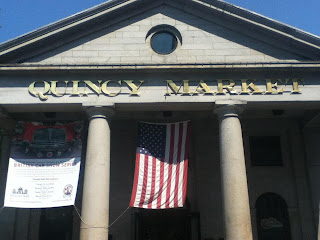 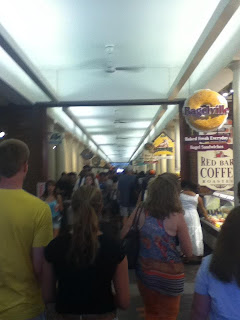 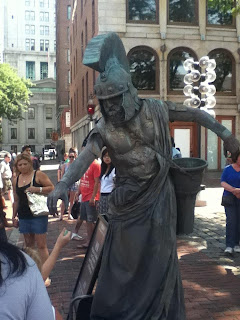 The thing to do at Quincy Market is of course eat! But more importantly, if you want the Boston experience, you need to eat certain things: Lobster Roll, Clam Chowder, or another seafood variety. Despite the fact that this is what you are supposed to do, the cafeteria has any food you could imagine: "philly" cheesesteaks, "NY" pizza, bagels, gelato, gyros, paninis, cookies, thai, everything. In addition to the food, there is also entertainment. We ran into a living statue and a duo performing magic tricks. I could have easily spent an entire afternoon or even the majority of a day hanging out here. However, my biggest recommendation would be to go during a cooler time of the year one a weekday. It was extremely hot, and being a main attraction, it was very crowded. All in all - this market is definitely an excellent thing to do and see if you are visiting Boston.
Posted by Jessie at 11:01 PM

Email ThisBlogThis!Share to TwitterShare to FacebookShare to Pinterest
Labels: Places to Eat, Things to do