Buy me some peanuts and cracker jacks...

Our most recent sporting event took place last week: a very belated birthday trip to Citi Field for Howie. If you live in New York, like baseball, or are passing through and wouldn't mind stopping off for something fun to do, I recommend visiting this ballpark. Its got a very cozy, intimate feel, which makes me favor it over the ostentatious Yankee Stadium.

Back to the story: As usual when traveling to Citi Field, we went separately - he took the subways from the city and I drove from north of the Bronx. This ended up being a fiasco filled with traffic, bridges, construction, and generalized game-day confusion in Queens. By the time I made it to the parking lot, I was quite agitated, worsened only by a poor cell phone connection trying to coordinate our respective locations. Eventually I was able to hear Howie well enough to make out a "WHAT DO YOU WANT FROM SHAKE SHACK - TEXT ME!" before loosing each other again. Finally having gained some useful information, I went directly to Shake Shack to order my delicious burger.


This was actually the highlight of my trip, as I previously had no idea that there was a Shake Shack at Citi Field, and Shake Shack happens to be one of my favorite "fast food" burgers (Five Guys is second and last on the list of fast food burgers I will eat).
After the chaos of our arrival, we sat down with our dinner just as batting practice was wrapping up (much to Howie's dismay). We had a very nice time watching a laid back game between the Mets and the Orioles on a humid hot summer's night. The game wasn't the most thrilling I've ever seen, but it was nice to sit back, be outside, and not be studying or stressing for a couple of hours. We did have a bit of excitement after the 6th inning when there was a very mini fireworks display that coincided with a Verizon commercial. Overall, it was a great time-out for us to have a little date. 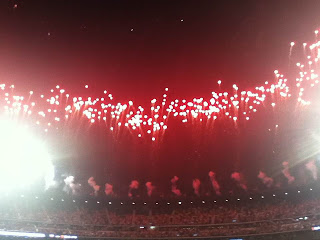 Email ThisBlogThis!Share to TwitterShare to FacebookShare to Pinterest
Labels: Sports, Things to do